The D503 is an easy to configure Ethernet-to-MVB gateway. It provides a line redundant MVB interface as well as up to two 10/100 Mb/s Ethernet interfaces (ETH0 / ETH1). The Ethernet connectors comply with IEC 61076-2-101 (D-coded; female). The Ethernet interfaces comply with IEEE 802.3 supporting 10BASE-T or 100BASE-TX, full duplex mode, auto-negotiation and auto MDI-X. Furthermore, the internal logic supports the &quot;Ethernet on traction vehicles&quot; standard IEC 61375-3-4. The optional second Ethernet interface ETH1 is intended to be used as a redundant line or as a separate channel for remote diagnostic and maintenance purposes. The MVB interface complies with the TCN standard IEC 61375 and supports devices up to class 4 including process and message data. Optionally, the device may act as a bus administrator. duagon&#39;s gateways are available with two variants – as platform to build a customer-specific application or as gateway with a standard configurable gateway application. The platform variant is accompanied by a development library that enables fast and efficient design of customer-specific applications. The gateway is integrated in a stainless-steel housing that can be mounted on a DIN rail or using M4 screws. The device can be powered directly from the vehicle battery or by Power over Ethernet (PoE). The D503 is designed for the harsh traction environment and conforms to the EN 50155, EN 50121, and IEC 61373 standards in general, but particularly by: 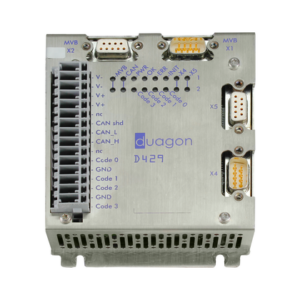 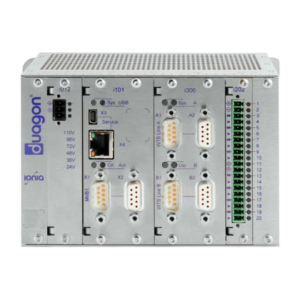 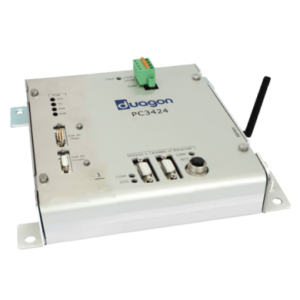